My name is Peter Pilgrim. I am a technical book author, a Java Champion, software developer and designer. I live in London, England.

Have you read Part 1 and Part 2? In final part, I will close up any other loosely ends to JavaOne 2013. 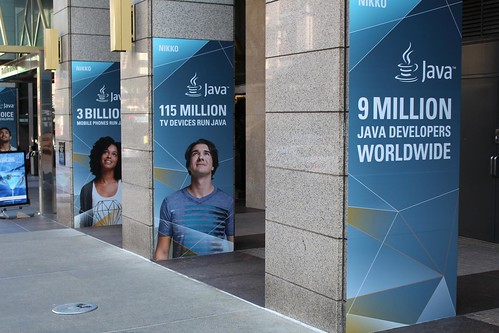 These were wallposter bills that were stuck onto the Nikko Hotel and they read, “Java the number #1 choice for enterprise developers”, “3 billion mobile phones run java”, “115 million TV devices run Java” and “9 million Java developers worldwide”. 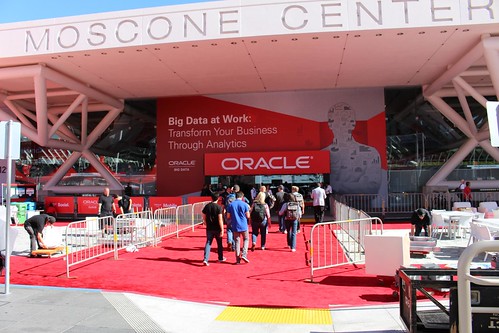 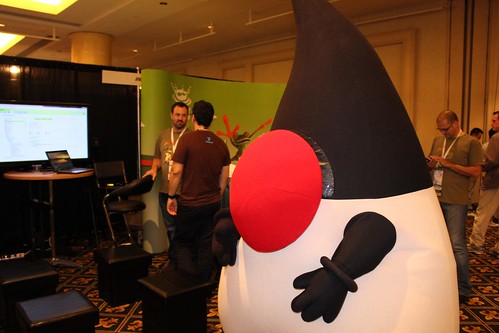 I had just hello at the JFrog stand behind Duke the Mascot, he came rambling around the corner so suddenly. 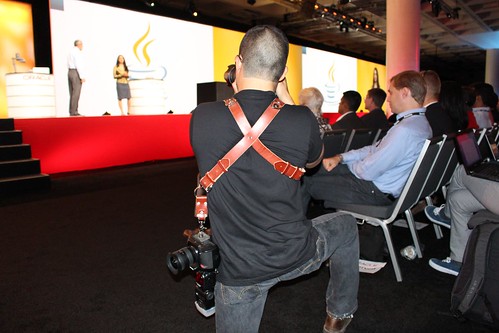 This is how the professional photographers take their pictures with a leather body harness to hang two DSLRs with different lens. Nandini Ramani is on stage in the background and sitting quietly is Henrik Stahl. 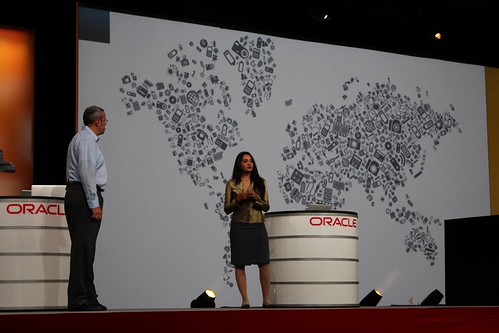 This is the technology Sunday keynote: Java is used everywhere piece. 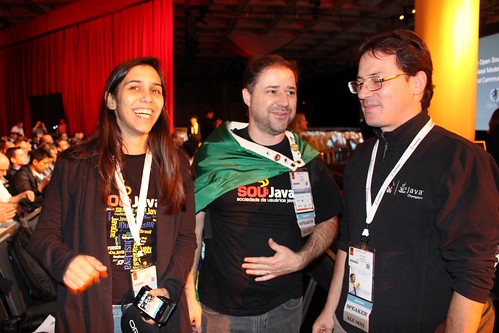 This is a small get together during the 15-20 minute break of the keynote, which was three hours long on Sunday. The people are (l) Yara Senger, Bruno Souza and (r) Andres Almiray. 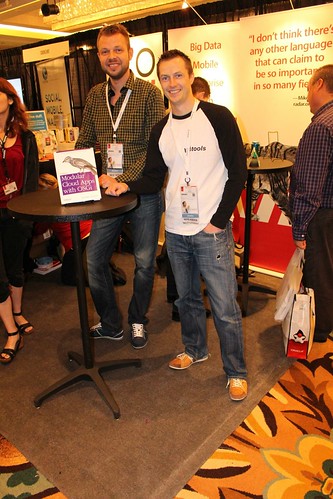 Another shot at the O’Reilly stand at the exhibition, where Paul Bakker and Sander Mak are book signing their OSGi book. 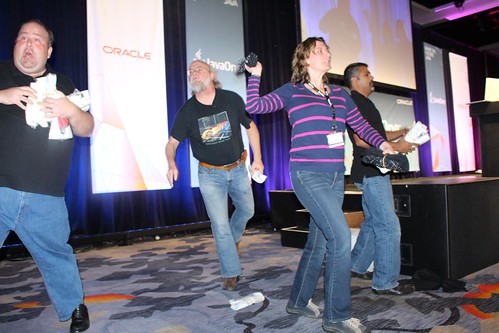 Sunday keynote action is back on with the tee-shirt throwing. James Gosling and Sharat are pitching them to the audience. Of course, those you will remember the older JavaOne when Sun Microsystem built contraptions to chuck the shirts far and wide.

Somebody asked me what was the attendance of the conference? To be honest, I do not know exactly the answer. I do know that there were 400 sessions at JavaOne and the average size of the rooms at JavaOne varied on the higher side of 100 seats. There were also big rooms in the Hilton Hotel (the Imperial Ballrooms) and at Parc 55 (Cyrill Magnins room) where the maximum number of seats were 200 or size. Given that also some people may not bother to going conference sessions all the time, I think that it would between 3000 and 5000 attendees. I felt like much the same attendance as last year, however I am not the person who should given the answer.

Incidentally, the biggest JavaOne I ever saw was 2005, when it was Java’s tenth birthday. In that year, the corridors under Moscone Center North and South were heaving and the attendance was 25,000. Also back in the day, Oracle OpenWorld was known to take 45,000 people. As to the individual and combined figures for 2013 then people must make enquires elsewhere. 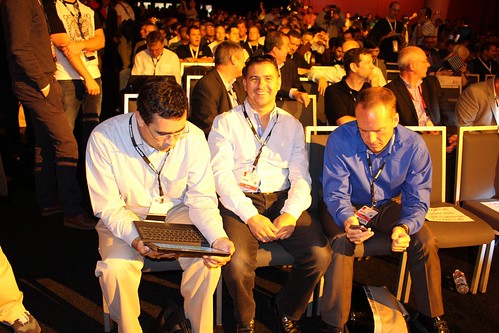 At the keynote break, I took this is a shot of the keynote depth, it stretched back scores of numbers of rows. You are looking at the front row executive seats reserved for Oracle employees or people involved in the keynotes. 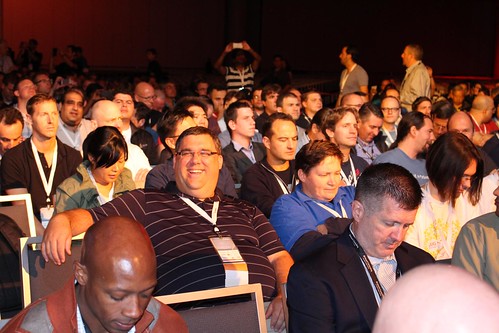 This is venerable Kevin Nilsson, a fellow Java Champion and co-leader of the Silicon Valley Java User Group, and very recently a new joiner at Google in Mountain View. 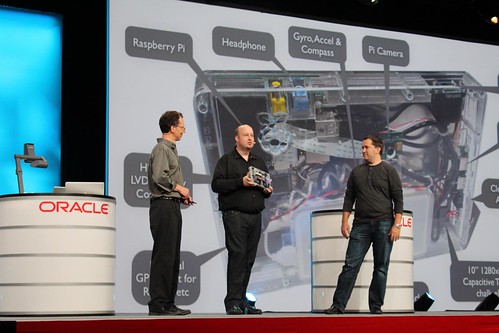 Jasper Potts is holding the Dukepad prototype do-it-yourself tablet, which runs embedded Java and Java FX 8 on a Raspberry Pi. He is stands with(l) Mark Reinhold and (r) Richard Bair 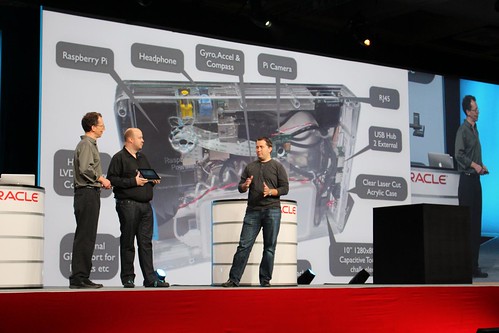 During the Sunday technology keynote, Richard Bair is talking about the JavaFX 8 running on the Dukepad. 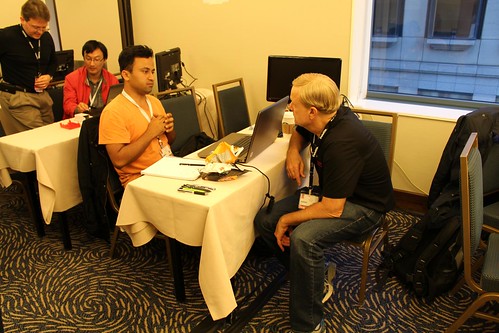 Jim Weaver is helping out a Raspberry Pi challenge participant in the embedded space. 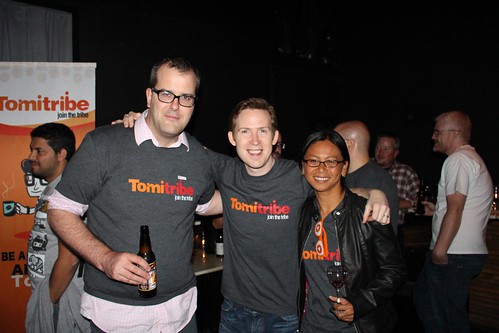 At the TomiTribe party, CEO David Blevins (centre) is celebrating the launch of his new company. Thanks for the invitation! 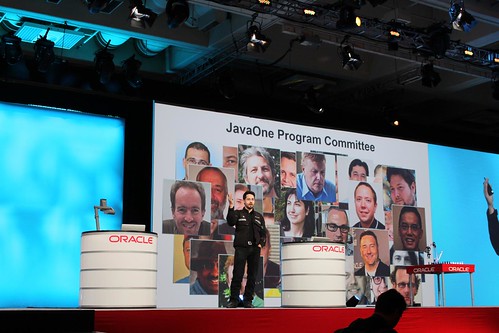 The JavaOne 2013 Program Committee bit where Stephen Chin asked all of those who helped make JavaOne to stand up and be recognised. 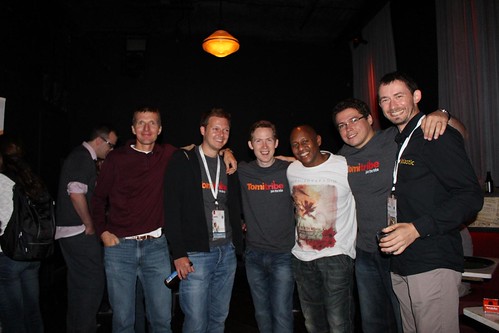 More of the TomiTribe staff party and I am actually in the shot for a change. They actually shared the duty with JElastic. You will have to ask both them as to what the division was. 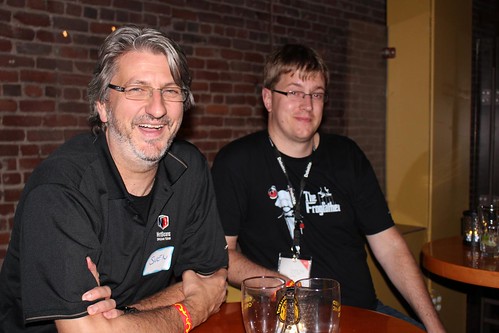 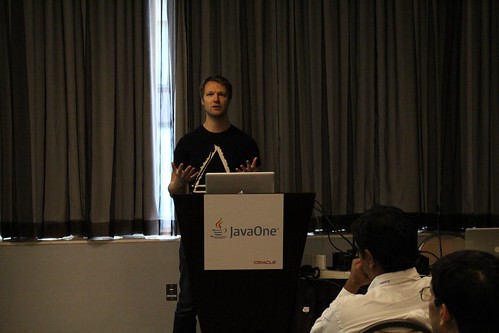 Here is Emmanuel Bernard at the Interceptors 1.2 talk 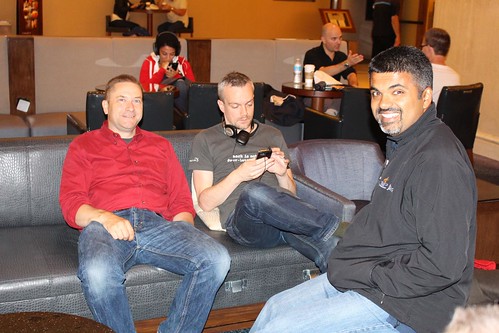 I seem to have had a strong connection with photographing Sharat Chander this year’s conference. Why? No idea. Sitting on the couch is (l) Simon Ritter and a pre-occupied Martijn Verburg (r). 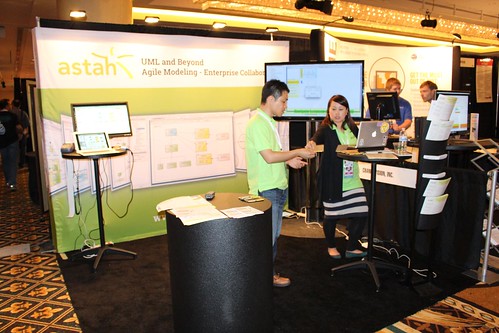 This was Astah UML stands and they giving out free Professional edition licenses to attendees. I can personally vouch for this little known Japanese company, because I bought Jude UML Professional in 2007 or so to do some architect design work. It was so easy to create sequence diagram, class diagrams and definitely helped with object oriented diagram. Jude UML eventually was rebranded and refactored to Astah. I used Astah community edition for some of the diagram in the Java EE 7 Developer Handbook. It is a great UML tool for Java development and block component prototyping. 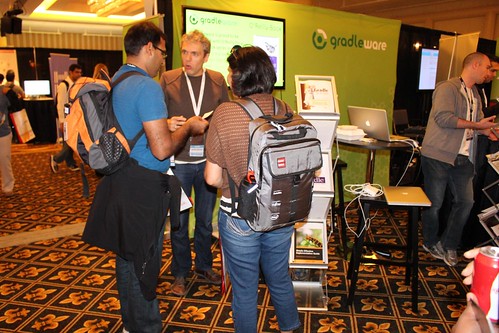 Hans Dockter is working the Gradleware stand. He was very busy with attendees, which is actually a very good thing as people are definitely interested in Gradle.

In no particular order: