This was the third day of the Round-Up. There were a Gradle Workshop by Hans Dockter, which actually was a presentation and it was not recorded as podcast, because it took place at Bruce’s house. The session moved from Rumours to the living space, because Hans required a large monitor. Much of the material for presentation can be found on the Silicon Valley video cast that Hans gave a talk to last year. 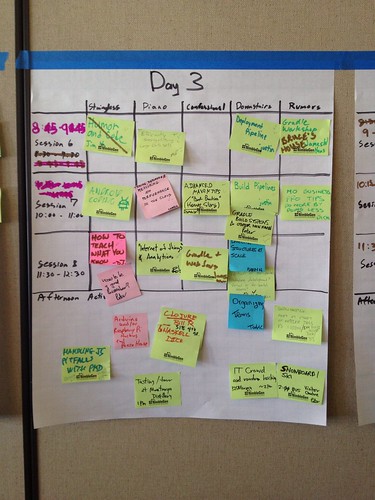 On return to the Parish Hall, I found myself in Build Pipelines, hosted by Justin Ryan, which someone added my original ticket to, which was titled Gradle Build Systems and Other Non-Maven Builders. I found this session more about continuous improvement and delivery. There lot of discussion on Jenkins and writing plug-ins using Chef and Puppet. This was interesting for Justin Ryan, because he works at Netflix, where they face deployment and being able to streamline dependencies. A lot of talk was about master of control: who owns ultimately the artifact between teams? Especially when said artifact is shared between lots of teams. Is the upstream team on the Maven coordinates (Group, Artifact, Version) able to bump up a version from 1.0 to 1.1 on a particular Jar just to see if it will smoke test the downstream? So perhaps this talk was a little out of my current daily work focus. I did suggest one idea having a master POM with properties, but it was unpopular. Hans arrived halfway through this session and of course being a proponent of Domain Driven Design brought his insight into pipelines.

The next session on my schedule was How to Teach What You Know? hosted by DJ Hagberg and myself with my title How to Be A Better Presenter?. Whilst everyone else, mostly, were downstairs in the Parish Hall, we had a really great session in the Stained Glass area. I really thought we packed a lot in to the session and when I came away from the discussion I could easily added some more hints and tips. I also learnt some ideas from Daniel Hinojosa on how to best to prepare content for sessions. Romain Pelisse also led his knowledge and experience on training client site to the session; he had some very valid suggestions and comments to prepare slides using LaTeX, or another tool to build PDF. One of his ideas is to prepare a book from a text file alone, which he just gives to the student an hour before the training. I contributed some opinions from my experience of running a Java User Group, standing up in front of audience, and especially some insights from my partner, who runs a business abd personal communication business. It was generally a great session: I can’t wait to hear it on the podcast later this year.

So the afternoon, on Thursday, was taken up by more snowboarding, this time on my own. I admit that I came a cropper on the last run of the afternoon. The day was overcast and there were some snowflakes, but not enough to make the piste a slushy mush. On the contrary, it was fairly icy on some parts of the mountains, because of the cold temperature. Certainly, riding with Chris Phleps, on the day before, was much better. 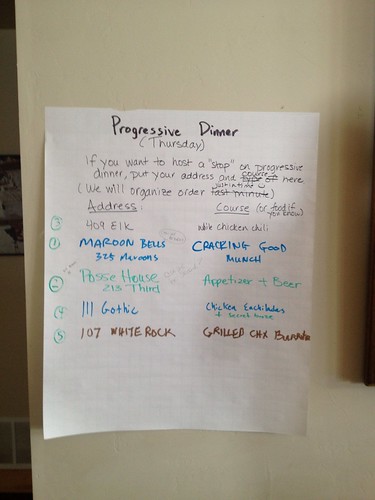 There were other events on ground, which obviously I did participate in, but you could if you want to, enjoy hacking with Clojure with Bill Robertson, or make some headway into Haskell with Dick Wall. Or you could have gone on cross-country skiing with Diane Marsh or DJ Hagberg. Those were choices made. That was it.

This year 2013, we continued the tradition of progressive dinners, where the Round-Up people moved from one house to another whilst get dinner and beverage. It was a great dinner event. My favourite was the Gothic house, where Chris Cobb had a Spanish theme of food, chicken enchiladas and a supremely tasty marguerita. I think he made it strong; it was powerful stuff in that bucket of limes, gin and juice. Goodness me, even writing this text about it is giving me the memories! Anyway, it was, indeed, lovely food. 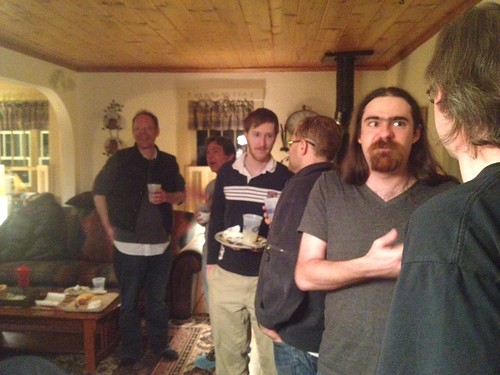 Romain Pelisse is talking to Guy Gascoigne-Piggford (at least I hope it is the back of his head!). In the Background (L-to-R) are Duncan, Gene Smalls, Joe Kramer is talking to Dimitry Kalinsky.

Thursday also was famous for the Karaoke night that Bruce Eckel and Dick Wall helped to organise at the LoBar. The Karoake night is set up by Bruce’s friend and they only got paid by tips. If you tipped more money, then it bought your song higher up the list in priority. It was a fun night, my favourite was Andrew Neely who worked his socks off with Digital Underground of Humpty Hump. 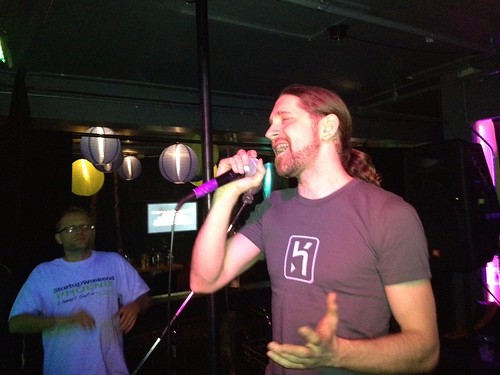