Wednesday was my absolute favourite day of the round-up. It was mid-week, we were half way through, already, the round-up. But before I can begin, I must say many of us had a late night at Joe Webber’s Princess bar. The jet lag had caught up with me by then, and the morning was rough, and yet I rush to the Parish Hall to get to session that I pinned up on the board: “How to be a Better Consultant?”. Well it did not happen, people were not interested in this topic and there was another one happening at the same. Instead, Romain Pelisse and I had a long chat downstairs in the comfy chairs. We poured over web sockets, Java, Scala, Red Hat and of course travelling to different countries to see clients. I just found Romain fascinating, and the fact that he does training for Red Hat is a good thing too. Sometimes, coincidence is the best thing, what does not occur is the destiny and the true path. 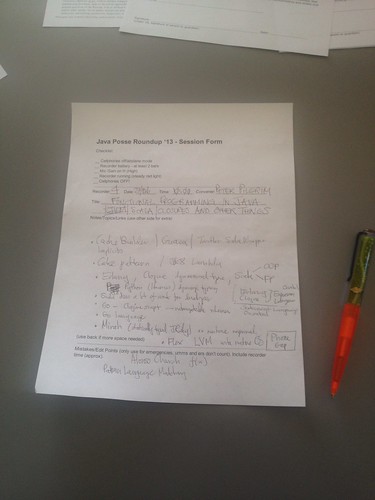 This is the official sheet that host must fill in to record a podcast session for the JavaPosse Round-Up; here is mine on Functional Programming

The second session of the second day was a little vacant. So I thought I am going to propose an session. I grabbed a post-it note and felt tip pen and scribbled down: Functional Java. Well what did I know. People was interested, people including Bill Robertson, Dick Wall, Bruce Eckel and Daniel Hinojosa. I think from this talk that I was letting my Scala learnings slip away. I know why, because I have writing feverishly on the Java EE 7 book, which is the main priority. I will get back on the Scala horse sooner rather later. Bill Robertson had a great deal to say about Closure and ClojureScript schemas. It was an interesting session to say the least.

The title Engineering Management Techniques and Insights was the final and third session of Wednesday. This was hosted by Barry Hawkins and Guy and myself. The other people were the instigators of the session, in truth. As guy put it: how can we lead without managing? The session revealed that there were no easy answers to great engineering management. There topics dived into a performance reviews, 360 reviews, Agile retrospectives; management by walking around the office was controversially seen by some, not particularly myself, as a bad idea. I believe this is going to be an interesting podcast, because you may or may not agree with the points on the tape. 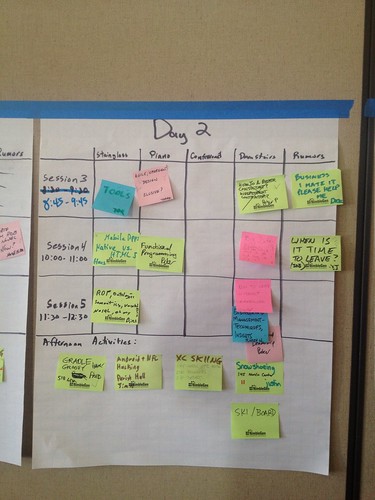 In the afternoon, I met up with Chris Phleps and we went to the Crested Butte, the weather was gorgeous, absolutely kind to us. Chris is a skier and I am a snowboarder; the funny thing is that we are both owners of GoPro helmet camera. Chris had a first generation and I had recently invested 200 quid in a third generation. It was a lot of fun riding together. If you want to see more about winter sports, please see my other related blog entry.

Day 2 of the Conference Wall. 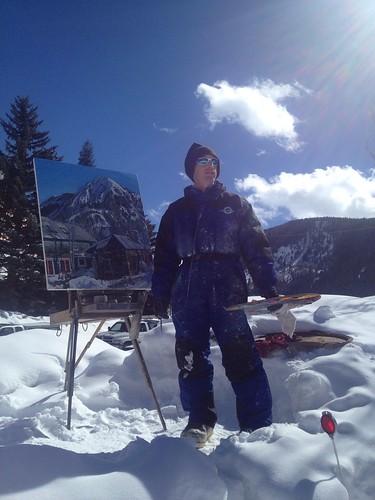 In between the sessions on Wednesday, I went to the Camp Four coffee shop just around the corner from the church. I saw this outside painting with oil colours the Crested Butte mountain. This local painter is called Shaun Horne; his paintings are displayed at the Telluride Gallery in Colorado, https://shaunhorne.com 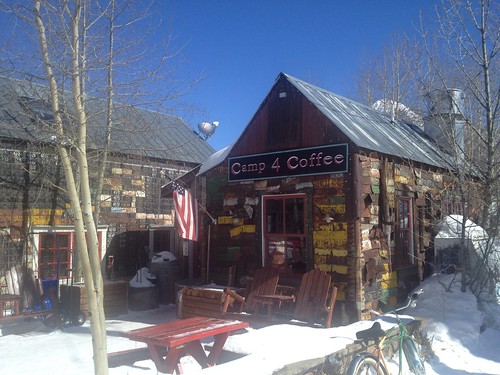 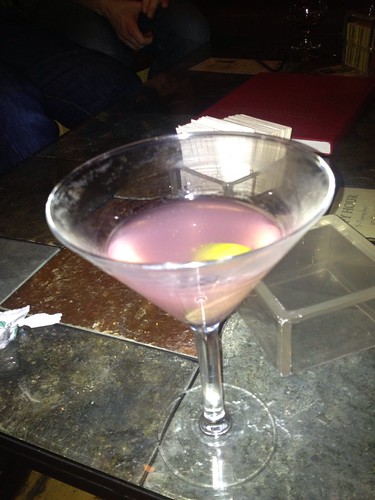 The mystery cosmopolitan cocktail from the Princess bar on Tuesday night: actually, it tasted delicious. A chance for developers to unwind and truly forget about professional work and the day job. 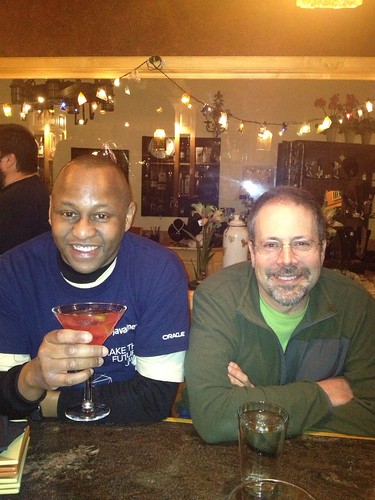 Uh oh. I have been caught red-handed with the cocktail in hand! To my right is Bruce Eckel, the co-organiser of the JavaPosse Round-Up open space conference, Bruce Eckel. This photo was taken by James Ward, who was working behing the Princess bar, helping out Joe Webber.