On Monday evening, 3rd December, 2012, I went along to the British Computer Society London in the Strand for a lecture from non other than Professor Sir Tony Hoare. It is not everyday you get meet a personality who has been so well deserved lauded in the computer science, in its history and its modernity and  brief time of existence. Tony Hoare was the inventor of the famous Quicksort computer algorithm in 1960 (at the age of 26). I remember a first encounter with the QuickSort algorithm in Herbert C. Schildt’s Programming in C book.

Professor Hoare was in town to give a Peter Landin lecture on Laws of Concurrent Design. The talk was essentially about mathematical calculus of computer programs; how they could be expressed in terms of mathematical functions, and set of basic axioms with rules, then could be composed together to proof notations about concurrency and sequential operations. 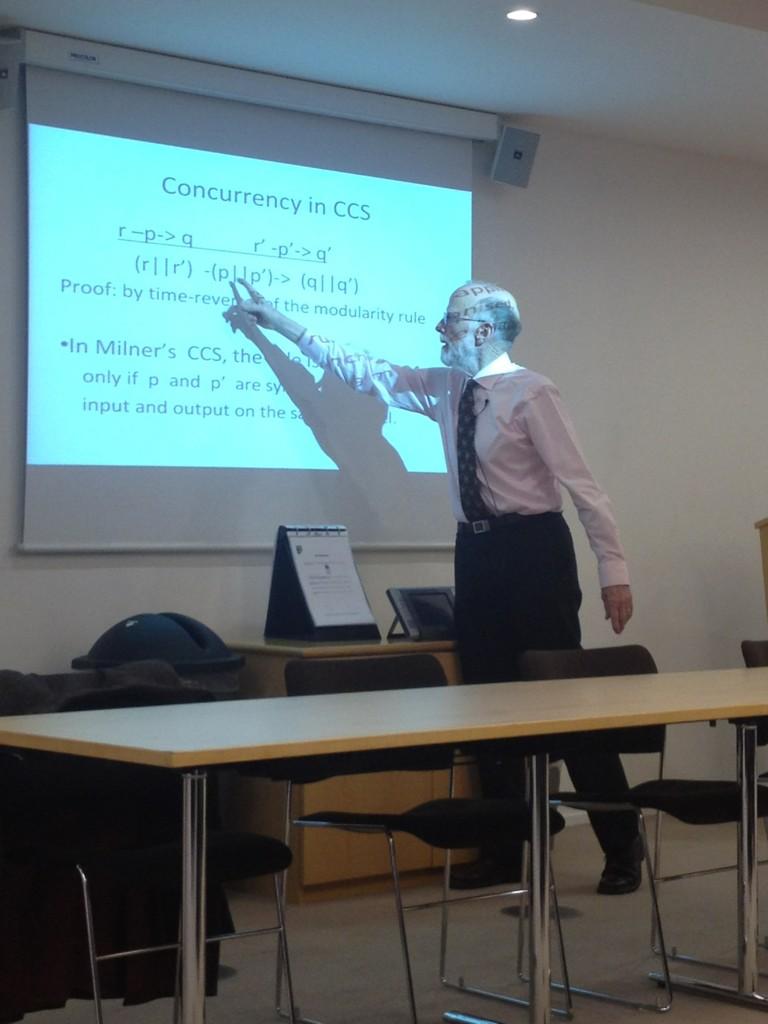 Oh gosh, it has been awful long time, since I personally looked at additional mathematics course book. Yet I understood this level of discourse in the talk. I found that I could understand the Exchange Axiom to my surprise. Although, I think Professor Hoare had simplified the actual formulas for the benefit of his talk and the level of the audience.

For the ordinary punter, dealing with this abstract mathematical terms is clearly out of the level of usefulness, however these are the theories that allows computer scientists to build programs such as compilers, static analysers and the tools that language writers use to build new programming languages in order to give us the world of devices and applications that we all use today. Without these pioneers in the computer programming arena, we would be, I think, far far behind. Indeed, we are standing, everyday, on the shoulders of giants and reaching for the stars.

I thoroughly enjoyed the Professor Hoare talk, and the fact that this guy is older than me and still working (at Microsoft Research in Cambridge, England) is inspiration enough to say to hell with silo management and bad attempts to be hip with the agile practices. Say hello to diversity in corporation, the future is for real. Here is a real star: a living legend.

PS: I also got meet up with some fellow ACCU members who also turned up for the lecture.