I have been going through my photographs from my October 2011 California trip. It is time to share and poke life. (See below for Dennis Ritchie)

“When you grow up you tend to get told that the world is [just] the way it is and your life is just to live your life inside the world. Try not bash into the walls too much. Try to have a nice family life. Have fun, and save a little money.”

“That’s a very limited life. Life can be much broader, once you discover one simple fact, and that is, everything around that you call life, was made up by people who were no smarter than you. And you can change it, you can influence it. You can build your own things that other people can use. Once you learn that you will never be the same again.”

“The minute that you understand that you can poke life and actually …you can push it in, something will pop out [on] the other side. You change [it], you can mould it. That’s maybe the most important thing.” 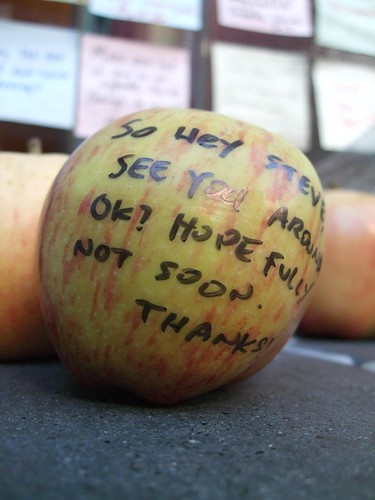 San Francisco Apple Store: “Hey Steve. See you around ok? Hopefully not soon. Thanks”. As Steve Jobs himself stated in the Reed College address that even people who want to go heaven, don’t want to die to get there. 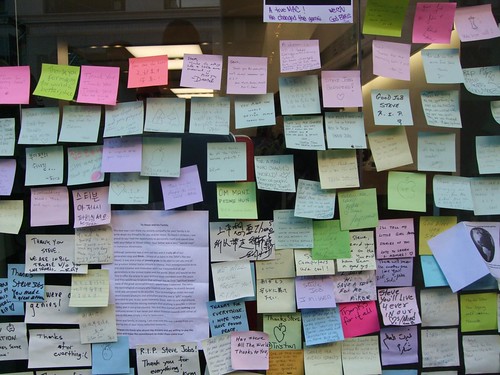 Emotions run high at the Apple Store, San Francisco. People do care and empathise with former CEO and Chairman of Apple. 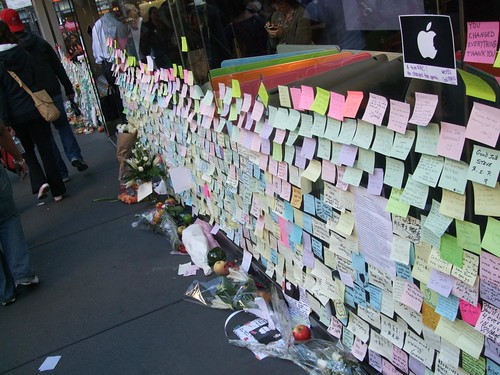 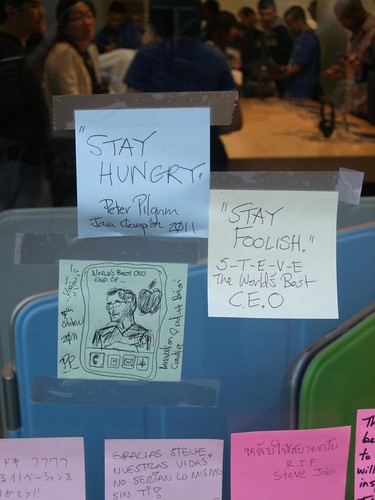 I wrote two and drew my post-it notes as a personal tribute. I did it in the evening on the way to dinner and walking back to Villa Florence Hotel. 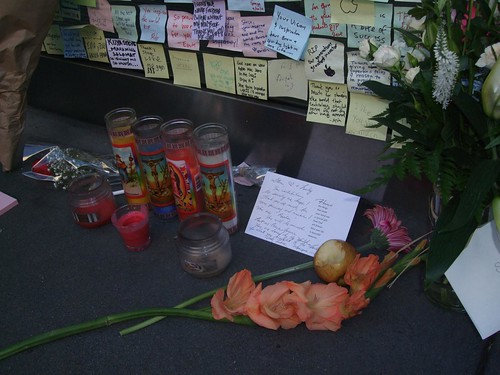 Poignant tributes that existed until 7th October 2011, until a violent hooligan lost the plot, and vandalised the people’s memorial. [The vandal voiced his ire, "What did f**king Steve Jobs ever do for me? I am f***ing poor and an American. This f**king computers are expensive! I can’t afford them! F*** Steve Jobs!"] 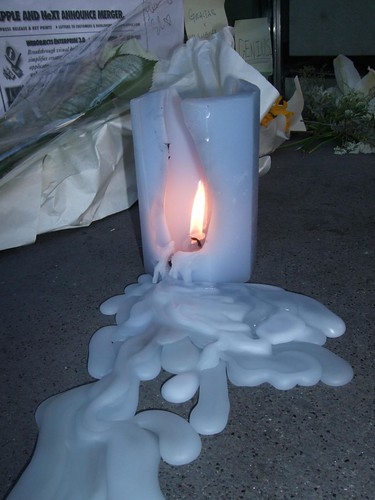 A lone candle burns on the street corner in SF 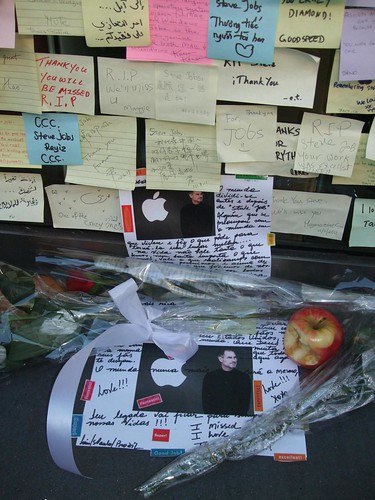 Tasteless or tact? I was reminded of our own Princess Diana’s sudden death in 1997. The irony was this similar brood affair was taking place in California, whilst I was attending, and speaking at a JavaOne conference. It was not lost on us, that we human do care enough, and we were sorry for Steve Jobs passing. I think this is what the focus on user experience and putting the user first can ultimately give you.

The British have a Royal family, so it was peculiar to see such an emotional event taking place in America. What is fascinating is that the respect and the time all of the onlookers took I to write their post-it notes. Where as the former HRH and Princess of Wales had lots of beautiful and oftentimes deep sentimental floral tributes strewn outside Buckingham Palace, much of it sadden a national by such unexpected loss. This time it was the tech aficionados of the entire world made the Apple Store’s nearest to them as places of homage and peace. Many of post-it notes were written by tourists, travellers, and conference attendees, in foreign languages in San Francisco and everyday fans of one or the other Apple consumer products, and the murals were all eloquent. I also never expected Steve Jobs to pass so suddenly, I too thought that he had a lot more time than he had. I for one will always remember this significant JavaOne conference and my time in America.

Overall, October was a sad time also for the passing of Dennis Ritchie, who co-created the programming language C and helped build the foundation of the modern day UNIX operating system. If Steve Jobs was uber important, then Dennis was a mega important. Without his insight in to turning out a easier programming language than, the then, assembly code, then we would still standing still in the dark ages of computers software engineering practice and methodology. Dennis Ritchie foresight was all of our gain. The turning of the tide. It was his creation of C the programming language that influenced Java the programming language and, of course, Objective C the lingua franca of Apple’s iOS native platform, through its popularisation under Steve Job’s NeXT operating system NeXSTSTEP. Other strands of that tree of C inspired Bjarne Stroustrup effort with C++ ( C with classes) and thus ushered in the field of Object Oriented Programming to the mainstream.

Both Steve Paul Jobs and Dennis MacAlistair Ritchie will be missed.