So I was at the Scala Exchange at Skills Matter last week. It was a really great mini-conference that happened in the middle of personal awkward time, a somewhat busy and confusing place in my space-time, my corner of the universe. Thanks for the invitation by Skills Matter as London’s only Java Champion, one of seven in the entire United Kingdom and Northern Ireland territory, I was there for the full two days.

Martin Odersksy opened the conference with a key note. He was just in on route from the Scala Days conference in Stanford University. California. Professor Odersky presented and talked about the new changes in Scala 2.9, especially in the parallel collections and the new Dynamic trait and of course the DelayedInit trait. He talked in depth about the parallel collection methods, the new abilities of the REPL, which allow users to use Bash Control-R syntax to search through the command history. Odersky also explained about the Scala executor. For instance you type “scala –jar my.jar” and your main program in Scala will be run, which behaves just like java. He discussed the formation of TypeSafe and the challenges in the concurrency fields, where EPFL received a multi-million dollar grant from Microsoft and the joint-research with Stanford into Scala DSL for popular parallel computing.

A lot of these points in the key note were way over the heads of most of us in the audience, however it was interesting to see that there is progressive research and targeted use of Scala in to hardest of all computing problems: how software can efficiently utilise the on-going exponential growth of microprocessor cores from now and into the future.

There were other luminaries, some very good speakers like James Strachan, who actually asked the audience, who at this time, right now, right here, actually develop Scala programs professionally? I observed rough 50% of the audience raise their hands. The Scala Exchange was sold out to about 120 audience members. So this was uplifting to witness this result. How good or how proficient the audience, which were Scala professional users  is another question. James Strachan gave an excellent talk on Scalate and the templating frameworks around Scala. It was well worth a look.

My time was limited and still is. I would like to make a shout-out to Renato of the Belgium Java User Group. (Hopefully with my present situation behind me, I will be able to make to Devoxx later this year, I mean, I would love to visit Antwerp again) 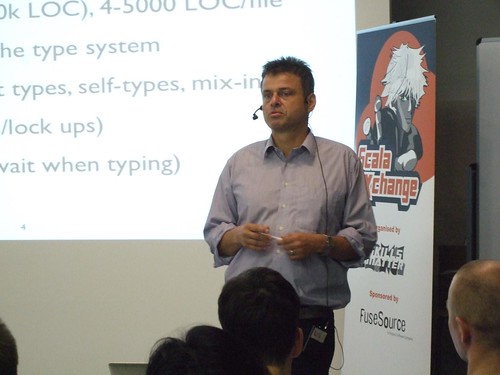 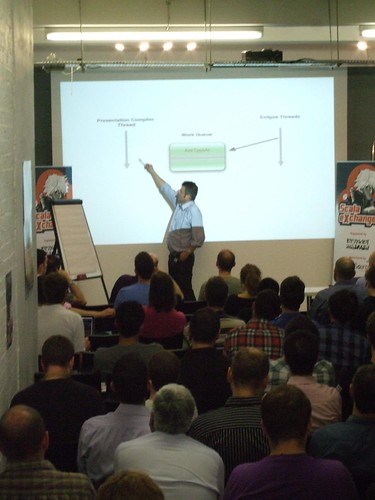 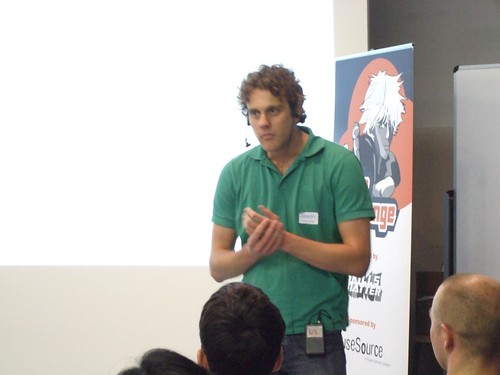 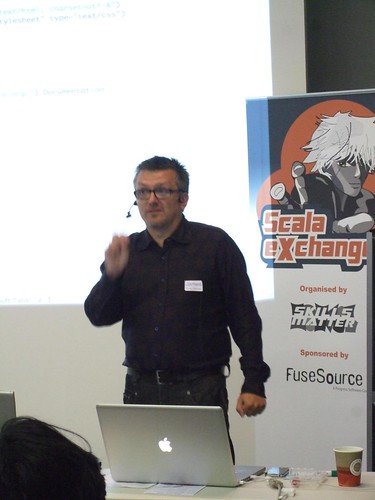