I was rather pleased that the JavaPosse released the RoundUp 2010 session that I chaired JavaFX The Sequel podcast episode 328. The Roundup  is a yearly unconference session organised by Bruce Eckel and JavaPosse and takes place in February or March at Crested Butte, Colorado, USA. Roundup 2010 was particular interesting, because we had just over one year of JavaFX releases since the version 1.0 in late 2008.

At the time the podcast was recorded, in March 2010, JavaFX Script was still the chosen way that Sun/Oracle were positioning the next Java rich user technology, JavaFX. We were still looking forward to the full JavaFX 1.3 release and all developers were mucking around with the JavaFX 1.2.2 release. During the conference Tor Norbye, a Sun/Oracle employee back then, had access to the non-public JavaFX 1.3 release branch and he gave us valuable in to the up and coming new features in 1.3. 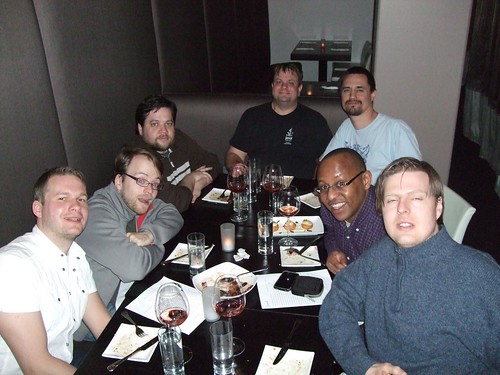 Here is a picture of me at the JavaPosse Round Up 2010 at the fabulous restaurant Django at the top of the mountain resort that is Crested Butte.  The cost is the restaurant is exhorbitant: one of everything, with two deserts for about USD 270.  Recognisable folk include Frederick Simon (JFrog) , Robert Cooper, etc

In the podcost, there were a number of salient points that I liked and still are valid:

Now that there is a new Roadmap for JavaFX 2.0 since the JavaOne 2010 conference, some items from the above are now mute.

In order to solve the lack of uptake issue for JavaFX, I think we need more context outside JavaFX (2.0) to become a reality, namely: