Well Hello Devoxx 2009 conference and it is Wednesday

First, a few words, on the conference itself. I think Devoxx is the
best conference this side of the Atlantic Ocean for Java news and
speakers. The technical quality of the speakers is excellent. Sun
Microsystems also feels this is a great community so they will sent
their top representatives like Brian Goetz, Mark Reinhold, Alex Buckley, Joe Darcy, Richard Bair, Bruno Souza and Aaron Houston.
So okay even if this conference was 500 participants down from last
year and the economic markets is suffering severe dislocation in many
countries of the world, this Devoxx conference is undoubtedly the
European standard, against which conferences have to be compare with.

This year yours truly has decided not write any more daily blog
reports. I think you, dearest reader, you have been getting thatmessage from myself with my AudioBoo and video drops over the past six to eight months or so.

Devoxx 2009 Interview with the Adaptavist guys

In other words, I think a daily blog is a complete waste of (my) time. Why? Because, people can get the best of external news from Twitter and professional journal blogs. However, I do think that the new digital media taking advantage of these technologies is the correct way to go. I attempted to do this on Tuesday night with a live link up with the JAVAWUG in London. Richard Gomes was hosting our very first Professional Jam #1. Antwerp’s timezone is one hour ahead of time of London, and still I found out later in the day that the Internet link at Skills Matter was unavailable. It was sod’s law, but I continue with my Ustream TV feed and recorded it. You can judge the results yourself of whether this helps user group members who unluckily unable to visit a conference such as Devoxx.

It was rough and ready and the quality of the video low, but I believe this is valuable in the next decade when we will be economically and airplane challenged. In English, travel may become more restrictive and socially frown upon unless it is necessary. I can certain JUG Leaders, like Marcelo Magno from the Milan JUG, using Ustream TV to broadcast live or recorded to native speakers of his user group who do not speak English very well. Tech has it’s uses and I am digressing here … 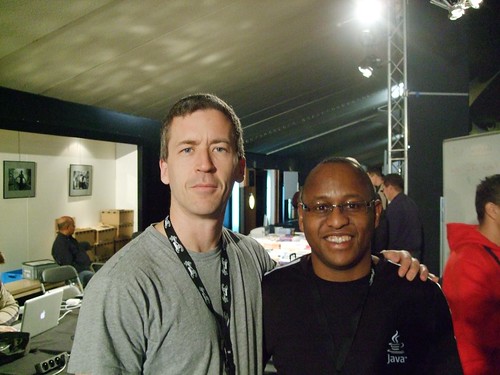 Chet Haase and I in a photograph. This is a real proud moment. What a graphics hero Chet Haase is?

Incredible Announcements and The Vector of Progress Continues Unabated

The top items of interest were JavaFX (of course), Java EE 6, Scala and JDK 7 Changes. Additionally, I was most impressed with the high standard of operation and integration of the Adobe Flex tools. In particular, the Adobe Catalyst demonstration was outstanding.
As a developer you can easily take the composition layers of a designer’s Photoshop, Illustrator or Flash file, and simply select a region, and automatically convert that graphic into an ActionScript button.This was for me watching it live physically unheard of usability and productivity between developers and designers. 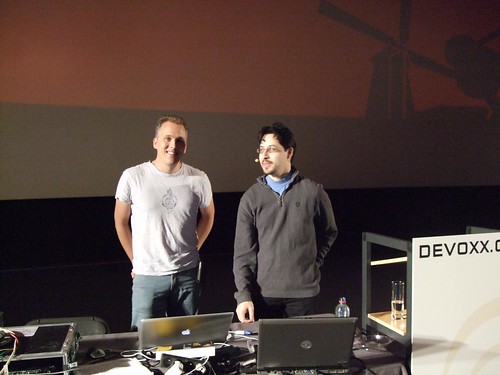 JavaFX started with Stephen Chin‘s University talk, which I thought was a light gentre introduction into JavaFX areas and capabilities. However, in the middle of this talk was a real clincher, Tor Norbye, the technical leader of authorisation tool, who demonstrated the Netbean JavaFX Rapid Application Development tool.

The NetBeans 6.8 team have been very busy. The Matisse qualities of the forthcoming RAD tools for JavaFX look very impressive indeed. The ability to drag components from the palette into a design canvas, the ability edit properties of those component is simply paramount programmability. The next trick that Tor showed off was the binding, timeline and animation capabilites. Yes that is quite right, the design canvas was not a static breadboard, it actually came to life with transformation, effects and opacities changes. Best of all this produce readable JavaFX code I think. I forgot to ask Tor whether this was reversible. Can you tweak the RAD tools JavaFX code and would it still work? Hmmm…. Anyway nice, I cannot wait for NetBeans 6.8 to be released. 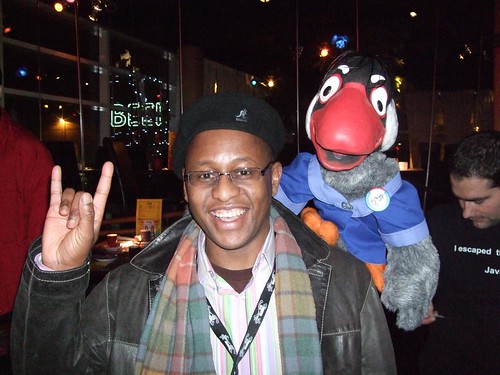 Juggy, the Brazilian Java User Group mascot and myself at Access, Bar Salsa.

There was a demonstration of the PRISM runtime exclusively in the last JavaFX session on Friday with Richard Bair and Jasper Potts. It was fast, fantastically fast. JavaFX 1.3 will be out on January/February 2010, I think they [Sun] are targetting the Mobile World Congress in Barcelona for this. Good luck boys, I hope you make it. PRISM is slated for next years JavaOne 2010 (or whatever they are going to call it). 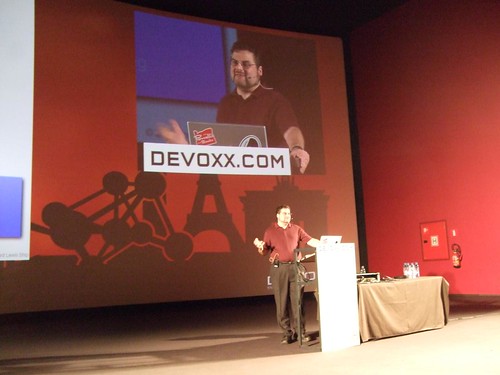 I was most impressed with ScalaTest and the ability to remove boilerplate code from EasyMock and the behaviour driven tests. Bill Venners was excellent and I want to take up the suggestion that a good way way to get involved in Scala is to start writing ScalaTest. He suggested that we use our own existing Java libraries and codebase to do this. Great idea.

Java EE 6 specification and the reference implementation looks good. We are finally getting an EJB container API that we can test outside the application server. Antonio Gonclaves and Alexis Moussine-Pouchkine had a great talk. The Servlet 3 API, however, from Kevin Nielson‘s eyes, at least when he discussed this topic with myself, looked weakened from what was originally expected, althought it is still a step forward in progress. Java EE 6 and the JDK 7, I believe, will make an awesome combination. No longer do we need monolithic application server that were truly heavy. Instead we might looking at web server monitors based on EJB Lite containers. The EJB might be facade on a data persistence that do need no damn SQL database server.

Of course there is now new direction, not quite a change of heart, in Closures for Java. Go to Stephen Colebourne‘s blog for more information on the JDK 7 Closures as they now stand up. 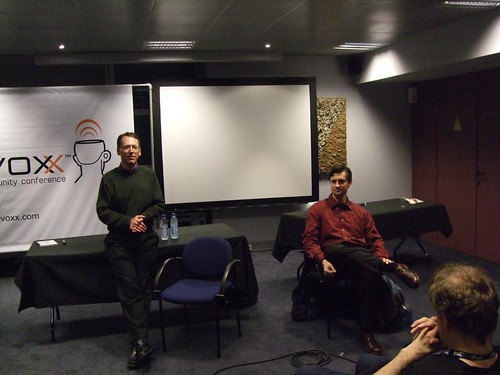 To left is Mark Reinhold of Sun Microsystem’s JDK 7 project and the Joe Darcy the technical lead of Project Coin “Small Changes” also for JDK 7. Both are participating with Brian Goetz and Alex Buckley (out of the picture) in a JDK 7 BOF at Devoxx on 18 November 2009

The best keynote of the entire conference was by Robert C. Martin. And so it was software professionalism that won the fight, hands-down. Martin was definitely the greatest show on earth. He was animated, he was enthused and he inspired all of us to do better in our testing. Why do not we as developer, designers and architect treat ourselves like blue-collar workers, clocking in by the hour. We are just as professionalism as accounts, bankers , lawyers and other executvies. Great stuff! 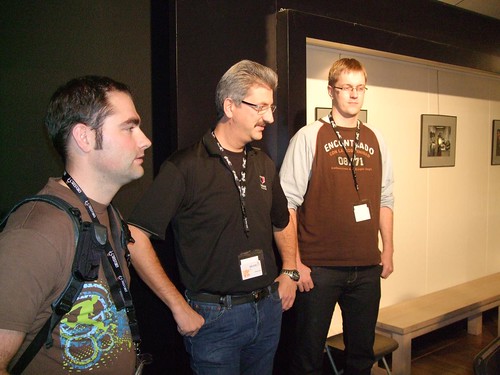 Sven (centre) of the NetBeans Dream Team and also Java Duke Award winner 2009 talking to Aaron Houston (out of the picture).

I bought only one book at the conference, a little something on Grails and a companion tome to Scott Davis’s Groovy Recipes. By the way, whatever  happened to Vaclav Pech’s GParalleliser quickie talk. Did I missed it?

What a ride?! Devoxx 2009 was just great. Obviously, I finished this article on the last day of the conference on Friday, 20th November 2009.

There many items, which I noticed, from previous years, which were
missing. The conference ended a couple of hours earlier this year, at
lunch time. There was no Friday lunch voucher. There was no daily
newspaper and the number of exhibitions were clearly down. Sun
Microsystems Belgium were not there this year, for example, which I
personally do not care about. However, the let us consider the
positives here for a minute. The Java Champions and most of the
European JUG leaders / co-JUG leaders were in attendance. You got
entrepreneur and really good technical/business people like David Booth
coming here, then most of the people in your niché of technology
whether it be Groovy, Scala, Fan(tom), SOA, FX or just plain Java
around. For me even members of the JAVAWUG , Markus K and Phil Haigh, made it over at the last
minute, the conference was not sold out a week before. I think it says
something about developers, designers and architects and that they are
still hungry of innovation, inspiration and good old community
socialisation. Above all, I strongly recommend the Devoxx conference to any Java
beginner in Europe who wants to expand their mind, to get ahead and to stay ahead of the pack. Just like “Public Enemy Number One! One, one, one. One, two, three, huue haarggh”

Finally, Parleys.com are offering, now, a subscription to Devoxx Online. For pnly 49.00EU for six months, you can get streamed videos of the conference show as they are transcoded, uploaded and produced on demand. This is great for those of you who could not attend Devoxx and also feel that you need some further education.

In no special order: