Tuesday, 26th February, 2013, the day one of the Round-Up. The shenanigans of United were left behind. Today was a fresh start, a time that duly manipulated into a recharge. I was exhausted, the others had gone ahead to Rumours for initial Round-Up coffee, then they walked a short distance to the Parish Hall. 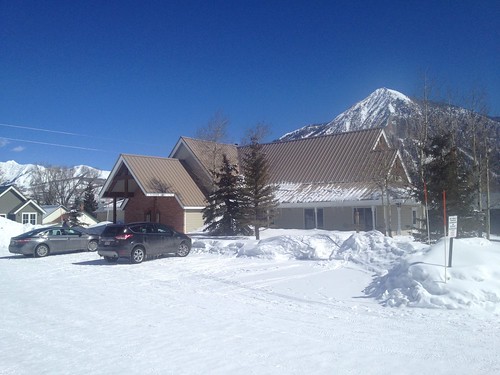 Whilst I was tucking in a scrambled egg breakfast, Bruce and the JavaPosse organised conference badges, explained what an Open Space was to new beginners, and everyone did a meet and greet again. By the time I arrived with my coffee, the room was a hive of activity, as participants took up post-notes and pinned proposed session titles to the wall. Open Space is a contributory activity; there is no achievement if you refuse to get involved. I proposed a Gradle session for Wednesday, which tied up with some else, who wanted a session of Build Pipelines; so those topics could be grouped together as a session. 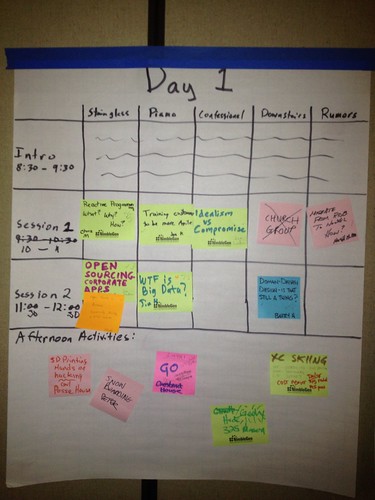 An example of the self-organisation of an open-space conference like the JavaPosse Round-Up. The participants come up with session ideas for the morning and also afternoon activities.
The church group were having meeting at 9:00, hence the hall was unavailable on this morning.

Because of the introductions and self-organisation of the participants, the first session took place at 10:00am and the second session followed at 11:30am. The sessions lasted one hour at the maximum and there is break between them. The first session of the round-up that I choose was Reactive Programming, which I think was proposed by James Ward. It was good discussion of asynchronous and non-blocking input and output operations of applications. We talked a lot about Scala in this session and some frameworks like Play, and comparisons to NodeJS. Many people expressed their view on this style of programming. The second session was hosted by Barry Hawkins and it was about Domain Driven Design and whether this subject has been usurped, diluted and vandalised by over zealous practitioners, and perhaps misunderstood by the developer community in the same way that Agile with a big-A is accepted by good practice, but poorly implemented by many organisations. I must admit prior to this one, I had no experience of Domain-Driven Design. I took part in it as this subject always appears at technical and agile conferences. I came away with tentative, yes, that maybe I should invest some time in the future to learn about Ubiquitous Language and Bounded Contexts. I believe I was put off from the subject, because of the perceived notion that DDD is strongly associated with Model Driven Architecture and meta language programming, which I absolutely have no such interest. Although, I have an interest in Domain Specific Languages, of course, such as ScalaFX, I have not yet come across a project where I need to be build a DSL to model a software design for client. I believe this podcast will be well worth a listen. After the morning session, I went back to the house and collected my snowboard.

There was no chance of slacking off today. 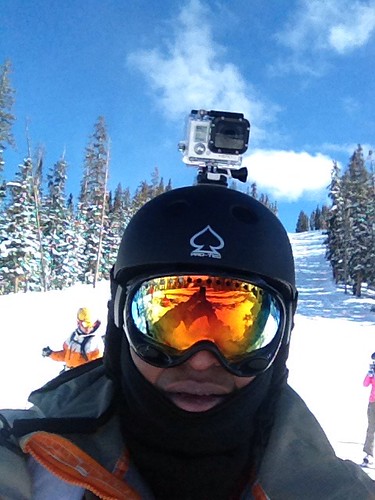 Picture of me with a helmet camera, GoPro Hero 3 Silver